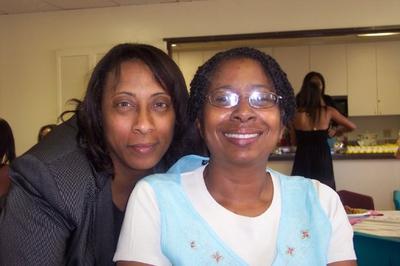 Novice Camper on the Left, Professional Camper on Right 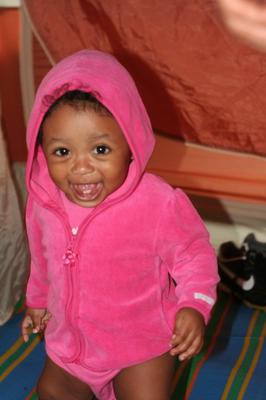 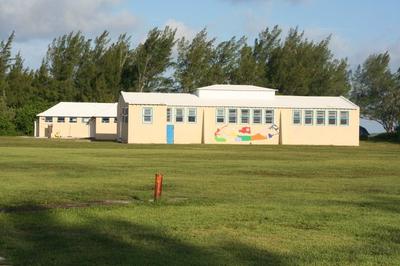 Instead of crying, I decided to hunker down in the dry tent with three other adults and our 1 yr. old granddaughter.

Within a few hours, it was completely dark, the rain was coming down in torrents, and the wind felt as though it was going to lift our tent up off the ground and launch us into the ocean…my thoughts were running mayhem all over my courage!! Was the Bermuda Triangle around these here parts? Were we in the Bermuda Triangle? Would I be able to walk on the water? Would we all drown? Would anyone find our bodies in this vast ocean? Maybe I could speak to this crazy storm, “Peace, be still!” I tried, but this was obviously a faith building activity, designed to stretch my faith!

I was mortified, petrified and about to lose my mind as our tent was being blown about the wind, so much so, that Damyon and Liz had to go out in the rain several time and pound the stakes back in the ground. Why would anyone do this for fun?!

I know this storm was pretty bad, because by 10:30 p.m. we were all very quiet… probably confessing all sin, and making sure we were right with GOD and praying for a miracle.

Around 11:00 or so, a man came walking toward our tent in the dark…What in the world??…Was it Darrell??…Is the island hunted, too?!?! If I didn’t understand that dead people are not walking around, but are asleep in the ground until the resurrection occurs, I would have died right then and there! Heart Attack!!

Now, honestly, I didn’t see the man, but Damyon did. As the man drew nearer to our tent, it became apparent, at least to Damyon, that he came in peace…I mean, I’m here writing this story, so obviously it turned out okay. He wasn’t a mass murderer, but a relative…Wait…he could have been a mass murderer, but we were safe because he was family who happened to be the caretaker…A sigh of relief.

Damyon spoke to this relative and asked him to unlock, the building, so that we could take up temporary residence in there until the storm passed, or the whole weekend. He left it unlocked for us with the instruction, that when we leave the building, relock it.
We discussed it, my daughter and I, along with the baby would go to the building. The skilled and proficient campers, Liz and Damyon, would ride out the storm in the tent. I don’t have a clue why they stayed, but they knew what they were doing. Relief was in sight, at this camping site.

By 11:15, the rain became a sprinkle and the wind ceased; yet we still decided to go to the building.
What folks must understand is that in Bermuda, it can be wet and rainy, and yet the humidity so high that you’re sweating as though you’ve been standing in a sauna in the middle of a summer day. We arrived at the building 100 yards away; happy to have a safe, dry place.

We checked out the building, within 10 minutes we went from happy to dismal. As we looked around, there were bugs, spiders and flies, oh my! There were webs and dust, not to mention, it was hotter in the building than it was outside. THIS HAS GOT TO BE NIGHTMARE on ELM STREET! (OR AT LEAST, on Devil’s Island!!) What is this place?! Where are we?! This can’t be happening to me, to us…can it?!

Needless to say, after weighing our options, waited for about 20 more minutes, or so and to our delight, the rain and the wind had stop!!

It was too hot in the building and there was no air conditioner. No AC, you say! This was Bermuda, many houses DON’T have air conditioning, let alone AC at a campsite… *rollin my eyes*.

So happy and grateful that the elements had ceased their raging, we decided to lock the building, and, head back over to the tents. Needless to say, I was a little embarrassed that I had abandoned the tent life over a little rain and wind. Believe it or not, less than halfway back to the tent, the rain and wind came up suddenly…so suddenly, we had to run to the tent AND THE WIND WAS WORSE! We couldn’t go back to the building, we’d locked the door. How Crazy!! This camping trip was doing to be the death of me!! If I survived the night, it would be a miracle.

After a season of prayer, perhaps this was done for the sake of ME inexperienced camper, a constant vigil of re-hammering tent pegs, and peace from GOD, I was able to settle down enough to sleep. My daughter told me I slept so hard, I snored. Little did they know, snoring was better than screaming all night!!

We awakened in the morning, to a bright and beautiful day, full of gorgeous sunshine, blue sky and blue water. The view from Liz’s favorite spot was beautiful. Though a bit breezy, compared to the heat at the other campsites, this was perfect. The day had been nearly perfect. The weather had been supreme, the food great, the fellowship enjoyable.

The reason I used the world “nearly” in the previous paragraph was because of the little visitors about the size of a jawbreakers (roaches…ewwwwww, big ones…I can’t even,…*shivering*… yucky).

Liz kept telling everyone to keep the tent zipped. I listened, because she was an expert when it came to camping on this Devil’s Island…lol.

The weather had been beautiful all day, the boat came, bringing new campers, and visitors; and others they took back. When the last boat left, some of the campers had departed. Why would they leave, it was so beautiful here. Wait, did they know something I didn’t?

LOLOLOL…Overall, that weekend of camping in the summer of 2010 in Bermuda was used by GOD to teach me several huge lessons: SPIRITUAL LESSON: trusting HIM in terror, hearing HIM in a pseudo-hurricane, and praising HIM in the turbulent are NECESSARY for survival in this world, which is not our home.

PHYSICAL LESSON: Plan to fast for the weekend and sleep outdoors, or in the facilities provided, that way, you won’t have to make trips back and forth to carry all your “stuff”.

MENTAL LESSON: Bible says, “Wine is a mocker, strong drink is raging and whosoever is deceived thereby is not wise”. Proverbs 20:4. If Solomon had gone camping on Darrell’s Island aka Devil’s Island that weekend, he would have included this: “Those who have never camped on Darrell’s Island in Liz’s favorite spot would do well to refrain from joining her…for the Rain there is a mocker, and strong winds is raging, and whosoever is deceived by its variableness is not wise.”

EMOTIONAL LESSON: Camping is NOT for the faint of heart…lololol.

GENERAL LESSON: Camping is NOT for me, but I will visit Darrell’s Island, as long as, I get on the last boat back to civilization.

GREATEST LESSON OF ALL: On the Other Side of the Storm, is the Breaking of the Day.

Write your own story.
Go to Your Camping Stories home page...

Sign Up To Receive the Tent Campn News Ezine